A tribute: I met Sgt Bloodworth in 1973 at Tank Turret School at Schools Bn Camp Pendleton. We were together again in 1974 3rd Tank Bn Oki. John introduced me to handball, tennis and racquetball. We even made SSgt together. Working in the Bn Maintenance office John was a terrific mentor and influenced me throughout my career. In 1978 we reconnected in 29 Palms where our wives met and became lifelong friends. Over the years John was more a brother than a friend to me. He was a genuine leader in every aspect, the well-being of those he worked with were his guiding force. He was a fluff and buff Marine but he was a Marine to the bone for 36 years. Rest in Peace my brother until we meet again!

Officer Duty Stations WO to LtCol: 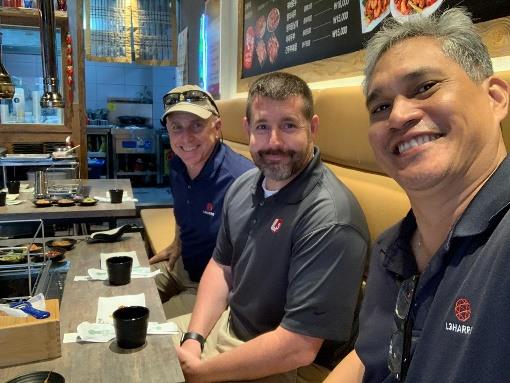 The L3Harris Logistics team of Rick Byno, Chad Bacastow and Andrew Antenorcurz traveled to South Korea to present the second and final delivery to Korea’s Department of Acquisition Program Administration (DAPA) and the Korean military. The event celebrated the delivery of Ground Panoramic Night Vision Goggles (GPNVG) five months ahead of schedule.

The relationship L3Harris and the Korean Military have cultivated over the years, according to Rick Byno, Director of Logistics for Communications Systems’ Integrated Vision Solutions (IVS) sector.

IVS began work on the GPNVG program in 2018 when the Republic of Korea officially awarded the company a the contract award for 1,052 units, as well as Logistics support to the equipment, repair parts, training and technical support. The contract was split between two deliveries, the first of which was made in November of last year, and the second originally scheduled for December 2020. However, during a Program
Management Review following the first delivery, Korean military officials requested an expedited delivery for the second shipment – almost half a year earlier than originally scheduled.

“Operations did a fantastic job meeting the milestones we were setting early,” Byno said. “This wasn’t one individual going above and beyond. We couldn’t have delivered early if it weren’t for Purchasing pulling in parts and monitoring delivery, Operations building the product, Product Management planning the build schedule within the other system sales, Quality ensuring it was inspected and tested, Packaging to get it to Korea and Exports and Finance to provide supporting paperwork. They all played a critical part in this. And our Logistics team didn’t bat an eye going over there during the pandemic.”

To meet the accelerated schedule, the company needed to pull material in earlier than expected, but IVS’ manufacturing team was “building like gangbusters” throughout the project, all without pulling in additional staff or adding shifts to the production line. According to Byno, employees operated as a unified team with a common goal and objective, committed to speed and excellence.

“That’s why they like doing business with us: we’re able to adapt and overcome to provide them with what they wanted,” he added. “Our relationship with their Special Forces organization is very close, and they’re always looking for the next piece of
equipment that will be a combat multiplier.” 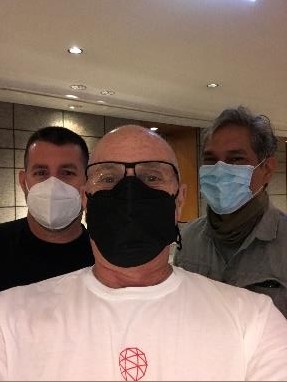 The two-week trip began with spending one night in a Korean government quarantine facility and getting tested for COVID-19. Negative test results came back in less than 10 hours, after which the team’s travel was monitored, and they were required to check in with an app downloaded on their phone every day.  “It was quite the experience,” Byno said. Mission complete!

MARADMINS : 457/20
R 062115Z AUG 20 MARADMIN 457/20 MSGID/GENADMIN/CMC L WASHINGTON DC// SUBJ/SOLICITATION FOR THE MARINE CORPS GROUND ORDNANCE MAINTENANCE ASSOCIATION (GOMA) AWARDS FOR FY 2020// REF/A/DOC/MCO 1650.61 W/ CH1// AMPN/REF A IS THE MARINE CORPS INSTALLATIONS AND LOGISTICS AWARDS PROGRAM (MCILAP)// POC/J. C. BECK/CAPT/UNIT: HQMC, I AND L LPM-2/TEL: 571-2567105/EMAIL: JASON.BECK@USMC.MIL// POC/L. C. BAUGHMAN/MGYSGT/UNIT: HQMC, I AND L LPM-2/TEL: 571256-7109/EMAIL: LANCE.BAUGHMAN@USMC.MIL// GENTEXT/REMARKS/ 1. Purpose. To solicit nominees for the 2020 USMC GOMA. The GOMA was established to recognize the outstanding achievements of individual Ground Ordnance Maintenance Marines on an annual basis. 1.a. The four award categories are as follows: 1.a.1. Marine Corps Ground Ordnance Maintenance Officer of the Year. 1.a.2. Marine Corps Ground Ordnance Maintenance Staff NonCommissioned Officer (SNCO) of the Year. 1.a.3. Marine Corps Ground Ordnance Maintenance NonCommissioned Officer (NCO) of the Year. 1.a.4. Marine Corps Ground Ordnance Maintenance Marine of the Year. 2. Situation. Selection of award recipients will be made by an awards board convened by Headquarters Marine Corps (HQMC), Installations and Logistics (I and L). The board will be comprised of senior members of the Ground Ordnance Maintenance community. The announcement of award winners and amplifying
instructions regarding the presentation of awards will be provided in future correspondence. 2.a. The evaluation of Individual Award submissions are based on the following four evaluation factors. 2.a.1. Mission Accomplishment: The service member’s accomplishments must show impact beyond that of the individual’s peer group and be directly related to the unit's or supported unit’s ability to accomplish its mission. 2.a.2. Problem Solving: The service member’s actions must clearly demonstrate their ability to resolve complex problems and markedly define the impact on support to the unit's or supported unit's mission. 2.a.3. Leadership: The service member’s actions must display the exceptional leadership traits associated with leading subordinates, peers, teams, and organizations through the dynamic requirements of unit mission requirements and those direct impacts on unit readiness. 2.a.4. Impact of Actions: The service member’s actions must clearly illustrate the degree of positive impact on unit and supported unit mission accomplishment while also sustaining unit readiness. 3. Action. Commands with personnel who meet the prerequisites contained in the reference are encouraged to submit nominations. Commands are directed to review reference (a) in its entirety and ensure that individual nomination packages are created and submitted in accordance with the reference and the information contained in this MARADMIN. 3.a. The 2020 GOMA competitive period is the 12-month period beginning 1 October 2019 and ending 30 September 2020. 3.b. All nominations must be received by HQMC, I and L, Materiel Readiness and Management Branch (LPM-2) no later than 30 November 2020. Due to the volume of award recommendations
received, late or incomplete nomination packages will be rejected. Commands are directed to scan and save packages in Portable Document Format (PDF) and send the file to the message points of contact via the Department of Defense Safe Access File Exchange (DOD SAFE) using https://safe.apps.mil/. Packages submitted via United States mail service will not be accepted. 3.c. It is highly recommended each command identified in the reference publish a submission schedule in order to screen, evaluate, and select nominations that allows sufficient time for the nomination package to arrive at HQMC, I and L, LPM-2 no later than 30 November 2020. 3.d. Commands are encouraged to conduct an internal board of all nomination packages and forward one package per category. This will ensure each command submits the most qualified candidate to represent their organization. 4. Responsibilities. HQMC, I and L, LPM-2 is responsible for coordinating Marine Corps participation for all GOMA selections and ceremonies conducted by the awards sponsor. 5. Reserve applicability. The GOMA is applicable to the Marine Corps Reserve. 6. Address questions pertaining to this MARADMIN to the above mentioned points of contact. 7. Release authorized by LtGen C. G. Chiarotti, Deputy Commandant for Installations and Logistics.//

Unfortunately, due to the PayPal redirection failing, we have significantly adjusted the Membership process.

New steps to become a member:

We just implemented a "Member Photos" section that will allow all users to upload their own personal photos of their Marine Corps friends, family, and experiences.

This is the first time trying this, so give it a shot and share some of those old war photos!

Let me know how it works and if you have any suggestions for improvement or expansion!

We will reschedule once we can

I would like to invite you to the first Ground Ordnance Maintenance Association (GOMA) social in the Lejeune area – the first of many. Nothing formal, with no agenda except to bring our Ordnance family (active and retired) together on a regular basis to break bread, have a drink if you wish, and enjoy a little esprit-de-corps with our fellow community members. Initially I’m thinking we will plan these events once a quarter, but we can see what the consensus is among the group.

Who: All Ordnance Marines, and significant others are invited too – if your MOS is 21XX, this means you!
What: Gather together for food and drinks with other Ordnance Marines
When: 7 April 2020, starting at 1700 and going until you’re ready to go home (may vary greatly depending on age!)
Where: Carolina Ale House, in the outside seating area – we have the whole area reserved
Why: To get Ordnance Marines together with those from other units and generations – to bridge the gap
Dress: Informal – there is no dress code, but nice pants and a collared shirt is always a safe bet

Coordinating instructions:
-You don’t have to be a GOMA member – but you should be anyway, and you can become a member easily by contacting CWO4 Bering.
-The Carolina Ale House will assign servers to us so everyone can order and pay individually. There will be an automatic gratuity (I think 18%) added to your bill, as normal with large groups – this doesn’t mean you can’t throw an extra tip on there to take care of your server. We definitely want to be invited back!
-If you can’t get there at 1700, that’s fine – show up when you can.
-If you plan to partake in adult beverages, plan your ride accordingly so we don’t have anyone get in trouble.

Here’s what I need from you: Help me get the word out! Specifically help me reach all the local retirees. I will ask Mr. Chuck Bushnell to put an event on the GOMA Facebook page to reach those who I don’t have emails for, but please be thinking about any retired Ordnance guys out there and let them know.

I am looking forward to this and many more to come. Don’t hesitate to reach out if you have questions.

Over the next few weeks, there may be some small growing pains on the website as we add some more features and information.

We are implementing a few new items, which may not be perfect right off the bat.  Many of these updates are already active!

If you see something out of sorts, please e-mail the webmaster (e-mail at the bottom of the page)!

Looking forward to hearing from you!

Congratulations to all the Awardees!

GENTEXT/REMARKS/1. As specified in reference (b), an annual awards board was convened to review nominations and select awardees for the Marine Corps Ground Ordnance Maintenance Association (GOMA) awards program. The Commandant of the Marine Corps congratulates the following Marines for their selection as the 2019 GOMA recipients.
(read in three columns)

2. This year's winners will be presented their awards during the annual Ground Ordnance Maintenance Advisory Group (GOMAG) meeting.

2.a. Winners will receive coordinating instructions to attend the GOMAG via SEPCOR. 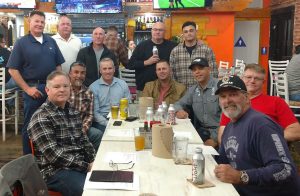 The 2nd West Coast Ground Ordnance Maintenance Association Social Event was held on February 19, 2020 at Senor Grubby's in Oceanside, Ca. The topics that were discussed during the event was Membership, Newsletter, Elections and how often should we have this social event in the future. This was another great event and was enjoyed by all. More to follow on this social event in the upcoming Newsletter. West Coast is also planning to have a GOMA golf tournament in late May or early June. Remember this is your association. SUPPORT IT. 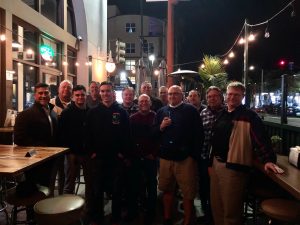 Festivities on the West Coast!!

This website uses cookies to improve your experience. We'll assume you accept this policy as long as you are using this websiteAcceptView Policy
Pursuant to MCO 5030.3B: Neither the United States Marine Corps nor any other component of the Department of Defense (DoD) has approved, endorsed, or authorized this activity. The appearance of U.S. DoD visual information does not imply or constitute DoD endorsement.